Most Attractive Places To Visit In Jaisalmer! 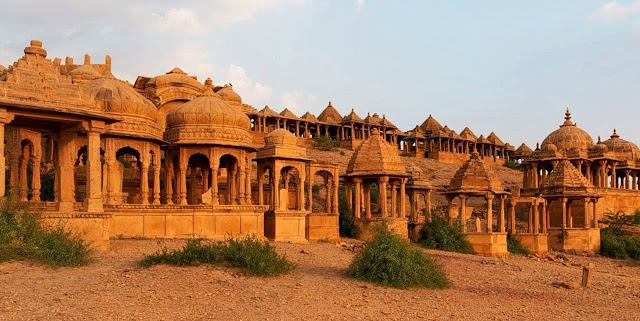 Located close to the Pakistan border, Jaisalmer is a major tourist destination located in the northwestern state of India, Rajasthan. The place is known for its desert and some other tourist attractions that make it an interesting destination to visit. It is called the 'golden city' due to the golden dunes in the Thar Desert. Jaisalmer is adorned with golden yellow sandstone with lakes, ornate Jain temples, Havelis, and palace stones. Tourists visiting here enjoy the Desert and Jeep Safari. There are many places to visit in Jaisalmer, where you will be thrilled to come by yourself.

Places To Visit In Jaisalmer:

Jaisalmer, the 'Golden City', symbolizes the charm of Rajasthan's royal palaces and a sandy desert with fighting camels. This famous tourist spot is in the center of the great Desert Thar. With Jaisalmer serving as the administrative headquarters of the district, it borders Pakistan, Bikaner, Barmer, and Jodhpur. Tourism plays an important major role in the district's economy. The city is named after the founder of the city, Rao Jaisal, who ruled Jaisalmer during the 12th century.

This 5 Haveli built near Jain Bhavan is a heritage of 5 brothers. They were built between 1800 and 1860. They were built by 5 sons of Gumanmal Bafna. The meshwork of these haveli’s, vaulted ceilings, and stained glass work is worth seeing.

Jaisalmer Fort is among the biggest of all the places to visit in Jaisalmer. It is, in fact, one of the largest forts around the world. Situated on the Tirukuta hill, this fort was built by Rao Jaisal, one of the most powerful rulers of Jaisalam. Located on the golden parts of the Thar Desert, this fort is also known as 'Sonar Fort' or 'Golden Fort'.

Over the last few centuries, this fort has witnessed many battles and successfully achieved the distinction of being one of the magnificent forts in Rajasthan. Approximately sixty feet high, the entrance is made of finest quality rosewood. Inside the fort, there are stables and fortresses of former Rajputana Gaurav kings.

Situated on the eastern slope of the Sonar Fort, this mansion was built in 1825 by Diwan Salim Singh. This mansion is one of the most beautiful and magnificent Havelis in Jaisalmer sightseeing. The upper part of this mansion, also known as Moti Mahal. It is very beautifully made. Although this mansion comes in residential use, it can still be seen.